In the fifties an English missionary, Dudley Dalton, arrived from Zambia and explored the southern area of Tanzania and found that the region was extremely underdeveloped. In many respects the people of this area were highly disadvantaged especially in regard to health provisions. He networked with the bible school and missions centre Wiedenest (today: Forum Wiedenest) in Bergneustadt Germany and inquired whether or not they could get involved. In Wiedenest a number of Christians felt the call from God to go onto the mission field but weren’t sure about any specific geographical locations. This is where Dudley Dalton’s vision met their calling. In 1957 the first five missionaries were sent out by Wiedenest to Tanzania to explore where to exactly focus their efforts. The english governor of Tunduru pointed the way to Mbesa.
The regional chief of Mbesa welcomed them providing they were to build a local hospital as many people especially women and children were dying in large numbers. He was willing to allocate a large piece of land for this purpose. After humble beginnings the foundation stone of the hospital was laid in 1959. 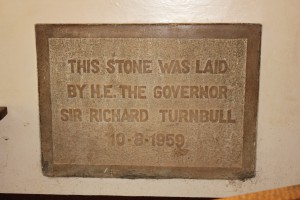 The founder of the hospital Dr. Dankmar Stein planned the facility with great foresight and expertise, which the hospital still benefits from today. In addition to Mbesa Mission hospital all church related work was interlinked with health care services, as there were no other medical provisions in this region. In Marumba, Mea Mtwaro, Matemanga and Tunduru (the districts capital) dispensaries were founded. In the early sixties the district hospital in Tunduru also received medical expertise from Doctors working at Mbesa Mission Hospital as there were no Doctors in the District Hospital in Tunduru at that time.
Up to this day the church in Tunduru is situated next to the District Hospital, which encapsulates the historical witness of the closeness of the two ministries. As a result of increased medical services of the Tanzanian government the dispensaries were handed over to the government, the last one in Marumba in 2008.